It's Release Day for Vanished Pride!

Vanished Pride is here... finally readers will see just how Paige -the sin sister brimming with Pride- becomes mated and fulfills her part of the legacy. I've chosen one of my favorite excerpts to share today. It's the moment in the book when Donovan allows himself to be who he truly is... which also happens to be just what Paige needs. They'd both been fighting themselves until Donovan accepts the only way to claim his mate is to take her in hand.

Spanking plays a large role in this book. For generations, Donovan's family has practiced Domestic Discipline. Though it may appear Paige disagrees with the practice in the beginning, she discovers the freedom it gives her as their Acclimation progresses. 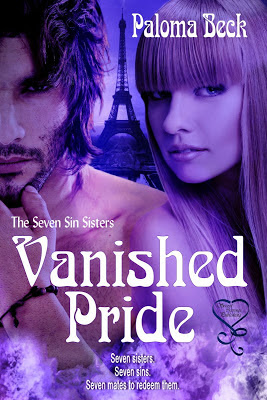 BLURB
Seven sisters are entwined in a legacy larger than ever expected. One by one, they’ll find their mates from the Valendite Breed, a group of near-immortal men, and secure their place in history. The trouble now is Paige has too much pride to go down easily. When confronted by her mate, she convinces him to wait.

Donovan agrees to Paige’s plan until things around him start to go wrong. He’s losing his concentration, making mistakes on critical missions for the Terrorist Elimination Unit (TEU), and now he’s assigned as Paige’s bodyguard. Donovan’s only weakness is his need for a mate to carry on the Breed. Now that he’s found Paige, the time has come for him to claim his mate. Taking Paige in hand might be the only choice he has as forces continue to mount against the Breed. Their Pronouncement will need to be sooner rather than later.