Trails of Love I Crawl

Hi Paloma, thanks for letting me be a guest on your blog today and talk about the eternal topics of lust for life and love. I say me when I actually mean my characters because, honestly speaking, I'm just their happy scribe. When they come to me, their story is already there and they just need an author willing to listen in silent midnight hours and magically transfer their words on paper (PC screen). That's how the tales I write are born, including Trails of Love I Crawl, the first two parts of which will be in the spotlight here today.

The story takes place in a complex fantasy world and is told in poetic, figurative language which is best suited for times long passed. If you are ready for a roller coaster of feelings, if you dare to accompany its protagonists in the moments of bliss and in the moments of their darkest hours, if you want to experience how it feels to hope, to fall, to despair, to scramble back on one's feet and hope and fight some more, then read on. It's a story of faith, life, love and lust that will steal your breath away and will leave you aching for more. 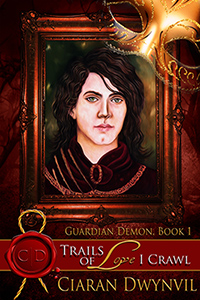 What happens when a guardian of two young men in love is misguided in his beliefs about gay relationships and sends his charges to a reformatory? Amédée's and Lucien's first reactions are shock and fear but they have no other choice than to submit to their guardian's will. Viktor, a first class impostor and the co-owner of the fearful institution, is ready to subject them to all kinds of painful reformations. Or?

The story of two star-crossed lovers soon picks up the pace when Viktor realizes that he is not entirely immune to Amédée's charms. And when High Demon Belial, the Prince of Trickery, the Lord of Lust and the Antilight, takes an interest in the innocent youths, events gather even more momentum. Are the mortals ready to walk and crawl the trails of love? And what effects will Belial's plays have on their destinies? See for yourself.

Part 2 Blurb
What do you do when you face the biggest fear of losing somebody you love? And what do the boys and men in this epic story about lust for life and love do? Do they cave in and lose their faith or do they fall, get to their feet again and fight on for the most powerful belief of all? And how do immortals influence their fates? Deathbearer is prowling around the Cherson's army encampment and this time she has found a better instrument for her malicious vengeance. Will her plotting destroy Belial's favorites or will he be able to protect them from all harm? Two boys, five men, and two immortals. Twenty-two nights of life. What will the full moon night bring? 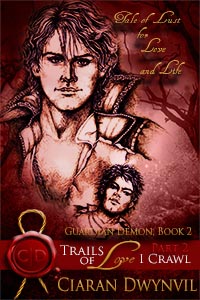 The wide smirk on the demon's full pouts revealed that he shamelessly enjoyed reading every single thought in his mind. It wasn't fair. But the gamble with life rarely was. And so it came as no surprise when his kidnapper advised him of his view. “Freedom is a severely overestimated concept.” Without giving him a chance to react in any verbal way, the devil snapped his fingers and called his pets: “Argyros, Donn!”

Before the proud something in Viktor cringed in expectation of the unspeakable humiliation of submission to playthings, the first of the demon's minions appeared out of the nowhere and his beauty left him with his mouth agape. Thunderstruck with loveliness of darkness, he could barely breathe and almost overheard his captor's entertained words: “Servitude, my dear, is but a small price to pay for closeness with perfection.” He couldn't shake his head to disagree. Not when whole his attention was on the silvery apparition approaching him so slowly. So painfully slowly. Everything about the demon boy seemed to be made of the purest, shiniest silver. More alluring than moonlight could ever be. His complexion, his lips, his hair. Everything. Everything but for a pair of wings in the most delicate pigeon blue and rose colors. Viktor could almost hear their silent swoosh through the air when the youth half unfurled them in apparent excitement from seeing his master. And the demon lord responded with the same gesture. His pale green membranous wings greeted the young one with a light flutter and Viktor immediately understood it was an unspoken way of the same reaffirmations he so much longed to hear from Amédée's lips. Yours I am and You're mine were exchanged in front of his eyes without a single word. And left him aching for such intimacy.

Dazzled by the slender boy, he was trying to take in his every feature. His presence called to him so loudly that he completely overheard another swoosh of wings behind him and wasn't aware of the other pet until the lad brushed past him to reach his master. Only then he noticed him and almost whimpered in overwhelming need. The demonic trio in front of him was so sensual, so arousing, so perfect in their nakedness. And the harmonious contrast between the two boys took his breath away. The second young demon was mocha-haired, his complexion resembled the softest cream and his wings had the color of the lightest foam on a cup of coffee. He couldn't see his face but would bet his life that he was just as beautiful as the silvery one was. For now he could only fantasize about a silver moon bathing in the dark waters of the river Oise as he gazed at their luxurious manes and listened to the silken timbre of their voices that spoke in unison: “Yes, Master?”

Thanks for reading this blog post and if you decide to get the books, then me and my characters wish you happy reading and invite you for a chat with them on my home blog. We love talking with our readers, so if you'd like to speak with them directly, don't hesitate to leave us a comment.

Author Bio
Ciaran lives in the Czech Republic and shares home with some ninety characters and three cats. Their eighty years old villa lies in the beautiful countryside of the Moravian Highland, where a day doesn't pass without seeing a hare, a deer, a heron, a buzzard... you name it. Far enough from the buzz of large cities, the gate into other worlds opens and story whisperers come to be heard. Come and listen to their bewitching tales too. They speak in every book Ciaran wrote, writes and will write for them.
Labels: AuthorFocus excerpt guest