Question of the Week with Stormie Kent

Thanks for having me on your blog, Paloma! Here is my question for your readers:
Are some emotional wounds too deep for even love to heal?

In my new EC release, Battling Rapture, I have taken two people who were betrayed by the most important people in their lives and thrown them together. They have each learned negative behaviors to cope with their shattered beliefs about love. Yet, neither Niki nor Rhine is what the other expected. Their attraction to each other is undeniable from the start. Will it help them each overcome the scars of their past? Take a peek at the sparks between my heroine and hero, Niki and Rhine. Can tenderness grow out of their volatility or are there some emotional wounds too deep for even love to heal?

BLURB
Niki is captured by hostile aliens after Earth is invaded. Once a soldier, she is now a slave. She is sold to the highest bidder, and then lost in a game of cards to a tall Ordanian spaceship captain, who claims to have been sent to rescue her. They work together to survive the dangers of the United Universe, while Niki battles her desire for the only man to ever enflame her mind, body and soul.

Captain Rhine’s mission is to reunite the Earth woman with her family. Outmaneuvering beast shifters and a crazed stalker are the very least he is willing to do to keep her by his side. Her touch ignites his passion. Her scent drives his lust. Her strength eases his soul even as she challenges him every step of the way. In the end, Rhine understands, the biggest battle is for her heart.

EXCERPT
The following excerpt is for those readers who are 18 and over only.
Copyright © Stormie Kent, 2013
All Rights Reserved, Ellora’s Cave Publishing, Inc. 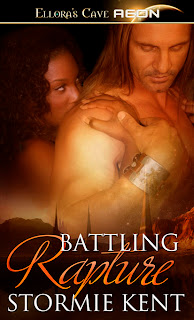 He pushed a button on the captain chair controls and turned to Niki. He stood. He observed her tense body and intense expression. She gazed back at him. Hostile was too mild for this woman.

His next move wasn’t going to make her any more docile. Before he could think too much about it, he snatched her from her seat and cradled her in his arms. He ran his hands over her back as he made sure to slide her along his front.

“What the hell are you doing? There isn’t time for you to feel me up, you perv.”

She pushed against his chest. Her struggles to free herself helped accomplish his goal and enflame his senses at the same time. Her full breasts pressed and jiggled against him as he clutched her ample ass. It was enough to make him forget his true purpose.

He caught her wrist before her palm connected with his nose.

He spun her away quickly. “I needed my scent to be fresh on you.”

She watched him through slit lids. He forced his eyes from her heaving breasts and focused on what was important. Her wide leg stance and fisted hands. He knew how fast she was. She wasn’t as quick as him, but she could do a lot of damage if he happened to be distracted, which he was. He sidestepped her first pass, moving away from the fist that almost struck his jaw. His right hand deflected her side kick and he used his left hand to grab her arm and jerk her around so that her back was flush against his front.

He crushed both her arms to her sides and jerked her away from anything she could gain leverage from with her feet. He couldn’t resist pressing his face to the crook of her neck and inhaling. Somehow their little sparring session was arousing him more than it angered him. He jerked his face back quickly as she turned her head to bite him.

“Calm down. You will be among strong hyper-sensitives who won’t believe I own a level one exotic and haven’t touched her.”

“Warn me next time, asshole. I don’t like surprises and I definitely don’t want to be manhandled.”

He leaned close to her ear and spoke softly. “You lie.” Her nipples were hard against his arms and the sweet spice of her pussy clouded his judgment. His cock pressed against her back. Her struggles stroked him nicely. “You call me Sir in alien company.”

So... WHAT DO YOU THINK?
Are some emotional wounds too deep for even love to heal?

About Stormie...
Stormie Kent is the author of romance with science-fiction, paranormal and contemporary elements. The universe she has envisioned for her erotic sci-fi romances are filled with warrior men and the women who fiercely love them. Space pirates abound with dueling goals of stealing your credits and your life or stealing villain credits and freeing the slaves of the United Universe. Stormie has imagined a world where the hostile alien invasion of the third planet from the Sun forces each surviving resident of a fractured Earth to seize their destiny or perish. Her first book, Enslaved in Desire, is available now.
Labels: AuthorFocus excerpt guest QuestionoftheWeek