Welcome Shandra Miller to Romance Beckons today for our Thursday13!

I have to admit, I struggled mightily trying to figure out what to write for this blog – my favorite 13 characters? My favorite 13 books? Authors? Thirteen reasons I write (I have dozens of reasons to write, until I sit down to list them then my mind goes blank)?

Last week Sarah Cass shared 13 of her character’s favorite quotes. I’m not one to reinvent the wheel if I can avoid it, so I decided to stay with the same theme Sarah established, with my own little twist.

Thirteen quotes I adore – I have others, but these I wanted to share with you. Some are serious, some clearly light-hearted, and a few come from characters in my new novel, LETHAL OBSESSION.

On Life:
(1) “You've got to be very careful if you don't know where you are going, because you might not get there.”
Yogi Berra
Hall of Fame baseball catcher.

(2) “Always go to other people's funerals, otherwise they won't come to yours.”
Yogi Berra

(3) “Half the lies they tell about me aren't true.”
Yogi Berra

On Writing:
(4) “There is nothing to writing. All you do is sit down at a typewriter and bleed.”
Ernest Hemingway
Maybe the greatest American writer?

(5) “Substitute 'damn' every time you're inclined to write 'very;' your editor will delete it and the writing will be just as it should be.”
Mark Twain
Writer, philosopher, and comedian

(6) “You must stay drunk on writing so reality cannot destroy you.”
Ray Bradbury
Science fiction writer

On Sex:
(7) “Good sex is like good bridge. If you don't have a good partner, you'd better have a good hand.”
Mae West
Hollywood Vixen

(8) “Someone told me the delightful story of the crusader who put a chastity belt on his wife and gave the key to his best friend for safekeeping, in case of his death. He had ridden only a few miles away when his friend, riding hard, caught up with him, saying 'You gave me the wrong key!”
Anaïs Nin
Author

(9) “The main reason Santa is so jolly is because he knows where all the bad girls live.”
George Carlin
Comedian

From my novel, LETHAL OBSESSION:
(10) “Bondage shows up in movies, television, but even then we’re usually shown as criminals, or at best people on the fringe, people outside normal society. We make good fodder for jokes, maybe as something an author or entertainer likes to think of as cutting-edge, but we’re like Freddy Krueger. Okay to indulge in your fears for a few minutes of entertainment, but then you leave the theater or close the book and go back to normal, sane people. We’re the taboo that everyone glares at, wonders about, but walks away from.”
Lady Sable
Professional Dominatrix, character in the novel LETHAL OBSESSION

(11) “Jesus Christ. Next thing you’re going to tell me is he had you trussed up like a damn turkey.”
Wayne Suggs
Fictional chief of Moose Creek, N.C. Police Department, from LETHAL OBSESSION

From the world of music:
(12) “Once in love you're never out of danger
One hot night spent with a stranger
All you wanted was somebody to hold on to yeah”
Rod Stewart,
From the song Passion, and an apt description of the predicament facing Detective Angela Martin, the main character in LETHAL OBSESSION 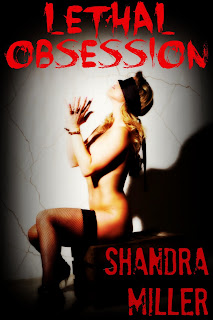 LETHAL OBSESSION, a brief synopsis
Angela Martin is like everyone else. She wants acceptance. Love. Passion.
For five years she’s lived with the pain of knowing her husband cheats on her. She’s dealt with the heart-rending rejection by rebuilding her life around her work, becoming the first woman detective in the history of the Moose Creek, N.C., police department.
Then she stumbles upon him. A man who reawakens desire, who makes her feel more alive than she believed possible by pulling her into a world of bondage and dominance, devotion and trust taken to a new level, fear mingling with desire, a craving stronger than any drug.
Soon women start turning up dead in Moose Creek, bound and tortured, tied in ways that Angela finds startling familiar. Angela’s heart tells her that her newfound love cannot be the killer, her detective instincts tell her otherwise, and her obsession with this new lifestyle draws her back to him, even at the risk of her life.

LETHAL OBSESSION is a tale of sex and bondage, love and fear, desire and suspicion, with an ending that will leave you breathless, craving more. 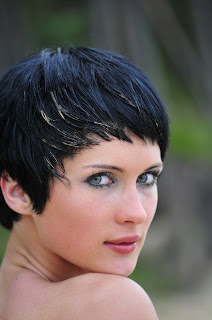 Shandra is a mid-western gal who left home at 16 and never looked back. Eventually she made her way to Florida, worked for three years as a carnie and another three with a circus -- yes, a real, live, honest-to-god circus. Traveled all through the South and Mid-Atlantic, town to town, on the road eight months at a time.

Now she’s a small-town office girl in North Carolina, filing papers, answering the phone. She doesn’t own a cell phone or a TV, she takes long walks at night, lies in the grass in the day time and watches the clouds go by, and she writes erotica. Blazing hot erotica. And mystery stories dripping with lust, sex and suspense.

You can also join her March Lethal Obsession blog tour -- There you’ll find contests and giveaways, and a chance at winning a $20 Amazon gift card and an e-copy of all of her published fiction!