Welcome Renee Rose to Romance Beckons.
I'm so excited to have her here today with her newest book. I haven't had time yet but I am dying to read this book! It looks like it might just be my favorite Renee Rose book so far and she's written some great ones.

Renee Rose, erotic romance author, did not come out of the closet as a spanko until she published her spanking romance Betrothed. A lifelong writer, she has a B.A. in creative writing from Knox College, where she won the Davenport prize for both fiction and poetry, and the Lorraine Smith prize for literary criticism. She spent thirteen years in technical writing before she found a way to incorporate her deepest, darkest spanking fantasies into fiction and express a part of her that longed to see the light. She is now passionate about supporting others in accepting and exploring their kink, whatever that may be. Please join the conversation at www.reneeroseromance.com.
You can also find her on:
Twitter  |  Facebook  |  Goodreads  |  Pinterest

Thank you, Paloma, for having me today!
I still remember dating a guy in college. The best he could say was, “I'm fond of you.” Well, at least he was honest-- he didn't pretend we had something we didn't.

Saying “I love you” is not always a plot point in every romance. Sometimes I forget, along with my characters to have them say it. Then there might be a misunderstanding and one of them has to say, “I should have told you sooner.” Sometimes I save it for the very end, and it becomes the declaration of Happily Ever After.

In Safe in His Arms, the hero, Zac, is a secret agent who can't possibly offer any kind of commitment to Becca, the mother of his child. Yet, in a moment of intimacy after spanking her, he can't help but blurt out the magic three words... 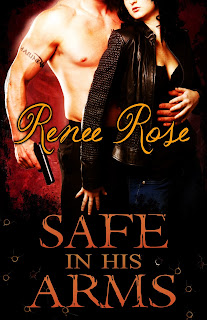 She’d been hiding her face against his chest, but her eyes flew open at his words as she stared at him in surprise. He looked shocked himself, as if he hadn’t meant to say such a thing out loud. He blinked rapidly.
“Speak low if you speak love,” she murmured.
His brow furrowed, then cleared. “Shakespeare?”
She nodded, reaching up to touch his cheek, then pulled his head down to hers, her mouth hungry for his, her tongue aggressive. His hands tightened on her, and he lifted her as he stood, returning her kiss with a heat and urgency that sent an enthusiastic spasm through her pussy.
He broke the kiss and tossed her back on the bed, peeling his shirt off in one swift motion, unbuttoning his pants as he climbed over her. The sight of an angry gash across his ribs made her gasp, but he ignored it, grabbing her knees and pushing them back to her shoulders, rolling her up like a ball and opening her sex to him. She jerked as his warm tongue licked into her, already just one stroke away from orgasm. The fresh pain of the whipping morphed into nothing more than a titillating sensation to track, along with the stimulation of his fingers pinching and tugging on one nipple as he worked his magic below.
“Please,” she pleaded, palming his head as his tongue penetrated and retreated, then circled her clit. She moaned and pushed his face into her, unable to move her hips against him in the position he had her pinned. “Please…Zac. Please,” she begged. She fought for control of her legs, but he smacked her flayed butt to keep her in place, turning her to mush with the evoked submission.
He slid two fingers inside, finding her g-spot. She let out a squeal, panic at her loss of control welling up moments before she squirted. Embarrassed, she tried to squirm away, but Zac didn’t relent.
“Oh, yeah, Becca,” he murmured approvingly at the squirt, pumping his fingers in and out of her, hitting the g-spot each time until her muscles clamped down on his fingers and she howled with the orgasm that ripped through her. Her entire body trembled as he gradually released her knees and slid his fingers out of her. She collapsed in a limp heap, panting, staring up at him.

For as long as she could remember, Becca dreamed of a dominant man to take her in hand, and Zac, the handsome Marine she met at her sister's wedding, filled the role with aplomb… for a weekend. Then the fling came to an end, Zac went off to war and died for his country, and Becca learned she carried a child who would be born without a father.

Seven years later, Becca has done her best to move on and forget about Zac… until the day she walks into her kitchen to find the man she believed she would never see again locked in mortal combat with her son’s nanny, and realizes everything she thought she knew about Zac was a lie.

Like all Black Ops agents, Zac doesn't exist in any government record. His life is a series of deadly missions, and relationships of any kind are unsanctioned. But he keeps one secret. He watches over Becca, the beautiful daughter of a rogue agent, and Parker, the six-year-old boy he fathered that fateful weekend. When he spots a known assassin in their apartment posing as a nanny, he's forced to reveal himself and take them to safety… whether Becca likes it or not.

While Becca may have enjoyed his dominance once, bending her to his will again may not be quite so easy. He is determined to keep her safe, however, and if a long, hard spanking is required, he is more than willing to oblige. Having Becca over his knee rekindles more than his passion, though; even when the immediate danger has passed, he finds it much more difficult to “ghost out” on his family again. Must he resign himself to protecting those he loves from afar, or can he find a way to be the man Becca needs and longs for, the man who is worthy of her submission and her love?