NEW COVER (and new lower price) for the Porter Brothers series!
With the closing of Secret Cravings Publishing, the first two books of the series have now been re-edited and self-published with new covers and lower prices on Amazon. Here's a preview from COMING HOME, book one in the series... 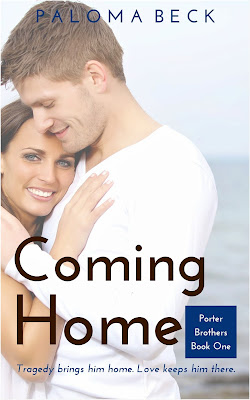 EXCERPT
“I don’t know what to do about this, about us,” Ryan spoke into Tyra’s ear, lying with her tucked into his chest and intertwining his fingers through hers. He traced the curve of her ear with his tongue and she shivered.

“I’m not sorry I did this,” Tyra said, “No matter what happens. It’s ok. You don’t owe me anything.”

The hairs on the back of Ryan’s neck stood up. She thought he would think he owed her something, that he wasn’t also thinking this was more than a fling after everything he’d told her.

“Hey. Look at me,” Ryan placed the crook of his finger underneath her chin and turned her face to him. He wanted there to be no doubt. “That’s not what I meant. I’m not trying to get away from you.”

He caught the sparkle that lit in her eyes—the hope—and he was humbled that he could inspire that.

Rachel Porter, a romance writer, has told her three sons tales of finding their true soul mate since they were just boys. She believes that there is but one match for every person. Now as men, they have yet to discover their soul mates. That is, until they come home…

Ryan Porter needs a change from his busy city lifestyle. After five years of living in New York and establishing his own real estate firm, something is still missing. When a tragedy brings Ryan back to his family’s rural home in Maine, he finds that missing piece.

Tyra has heard stories of Ryan since she first met his family years earlier. Now Ryan has come home and he is more than she dreamed he would be. Neither can fight their attraction for the other. And while Tyra just might be the catalyst for the change Ryan needs, first he must embrace Tyra’s secrets.

With family secrets creeping out, a profitable relationship ending, trouble with his company and the unexpected loss of his father, Ryan’s life has been thrown off course. The one thing he’s got going for him is the new woman stirring up emotions he’s never experienced before. Tyra might be the one who convinces Ryan there’s truth to his mother’s tales of a soul mate.

Book Hooks is a weekly meme hosted by MFRW Authors Blog.
This is a chance for readers to get hooked on a new book! Authors share a short excerpt from their books. If you enjoy the sample, consider purchasing the full book through their buy link.

Get Hooked on other Books!