#Thursday13 Fave Books Of All Time


Welcome Author Vanessa Morgan!
Thank you for having me on your blog today. I'm truly honored to be here with all of you! As it's Thursday Thirteen today, I thought I'd tell you about my thirteen favorite books. Enjoy!

(2) The Olive Garden by Carol Drinkwater
The highs and lows of Provençal life: living in a warmer clime, eating fresh Mediterranean food, the adoption of a menagerie of animals, swimming in one’s own pool and the thrill of harvesting your own olives.

(3) The Comfort Of Strangers by Ian McEwan
I first came into contact with this hauntingly beautiful story through Paul Schrader’s movie adaptation in my early twenties. I saw the movie twice in one day and went to buy Ian McEwan’s novella the day after. The story: Colin and Mary are bored lovers on vacation in Italy. They accidently bump into Robert, a seemingly friendly man, and they quickly become drawn into a dangerous fantasy of violence and obsession.

(4) The Hottest State by Ethan Hawke
Actor Ethan Hawke encapsulates well the characteristics of a doomed love affair and the psychological breakdown which follows it. I love this novella for its emotional honesty and its simple, yet poetic style. Hawke directed his own film version in 2006, but as much as I loved the book, the movie just didn't do it for me.

(5) Tweemaal leven by Clem Schouwenaers
A Flemish classic in which a man, bored of his routinous office life, decides to leave his job and be free.

(6) Shangai Baby by Wei Hui
Publicly burned in China for its sensual nature and irreverent style, this novel is the semi-autobiographical story of Coco and her love for two men: Tian Tian, for whom she feels tenderness and love, and the Westerner Mark with whom she begins a highly-charged physical affair.

(7) Elegance by Kathleen Tessaro
My favorite romance novel. Elegance, by British author/actress Kathleen Tessaro, is not only wonderfully romantic, it also captures well the fears of most women: the uncertainties about our looks and age and the regrets of not leading the life one has hoped for.

(8) Prozac Nation by Elizabeth Wurtzel
A young woman struggles with depression during her first year at Harvard. Based on a true story.

(9) American Psycho by Bret Easton Ellis
Young, handsome, and well-educated, Patrick Bateman earns a fortune on Wall Street and spends his nights with expensive dinners, drugs, prostitutes and murder. American Psycho was my main inspiration for my vampire story A GOOD MAN.

(10) Shadows by John Saul
John Saul is my favorite horror author. Nothing intellectual here, just plain entertainment with some unexpected twists. Shadows, Second Child, Guardian, The Homing and Suffer The Children are his best ones, but it's difficult to pick a favorite.

(11) Career Girls by Louise Bagshawe
Super sexy page-turner about two women who are determined to succeed in their chosen careers – Topaz as a journalist and Rowena in the music industry.

(12) Death And Nightingales by Eugene McCabe
McCabe’s powerful, gruffly lyrical novel, chronicles the struggles of a courageous Irish woman in Northern Ireland in the ninteenth century.

(13) Love And Death on Long Island by Gilbert Adair
An old-fashioned British novelist inadvertently finds himself watching Hotpants College II, where he first gazes upon an American heartthrob. He soon finds himself giving in to his homosexual crush by scouring teen magazines and traveling to Long Island intent on meeting the boy. 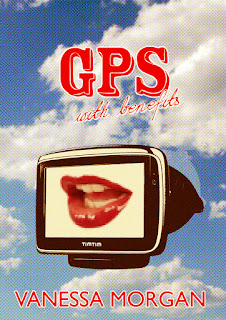 About the author
Vanessa Morgan is known as the 'female version of Stephen King'. Her screenplays, A GOOD MAN and GPS WITH BENEFITS, are currently being turned into movies. She is also the author of the books DROWNED SORROW and THE STRANGERS OUTSIDE. If she's not working on her latest supernatural thriller, you can find her reading, watching horror movies, blogging, digging through flea markets or indulging in her unhealthy obsession to her cat. She writes in English, Dutch and French. You can find her at http://vanessa-morgan.blogspot.com and https://www.amazon.com/author/vanessamorgan.

Her latest release, GPS WITH BENEFITS...
where a womanizer purchases a new GPS device, not knowing it's one with a mind of 'her' own.