Mind Over Matter for #SatSpanks

This week, I'm sharing an excerpt from VANISHED PRIDE. This is the fourth book in the Seven Sin Sisters and the excerpt is from one of her first spankings. 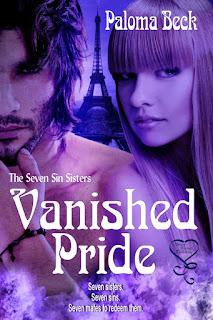 Seven sisters are entwined in a legacy larger than ever expected. One by one, they’ll find their mates from the Valendite Breed, a group of near-immortal men, and secure their place in history. The trouble now is Paige. She has too much pride to go down easily so when confronted by her mate, she convinces him to give her more time.

Donovan agrees to Paige’s plan until things around him start to go wrong. He’s losing his concentration, making mistakes on critical missions for the Terrorist Elimination Unit (TEU), and now he’s assigned as Paige’s bodyguard.

Donovan’s only weakness is his need for a mate to carry on the Breed. Now that he’s found Paige, the time has come for him to claim his mate. Taking Paige in hand might be the only choice he has as forces continue to mount against the Breed. Will she come to see their Pronouncement will need to be sooner rather than later?

“Mind over matter. You can do this and I promise it will help.”


“H-how do you kn-know?” Paige spoke through her tears.


“Because I’m your mate; and it’s determined that I’m to know what’s best for you.” Donovan’s confidence as he spoke reassured a part of Paige that still held doubt.

She shuddered at his words, too many emotions racing through her mind to think straight, and then did as he said, finding comfort in his gentle touches. Donovan’s hand slapping down on her bottom with such authority pulled her into the spell he wove.

Saturday Spankings is a weekly blog meme devoted to spankings. Authors who write spanking stories post six to eight sentences from one of their books. Be sure to click through the list below to read excerpts from all the participants. If you tweet, you can also follow the posts on #SatSpanks.